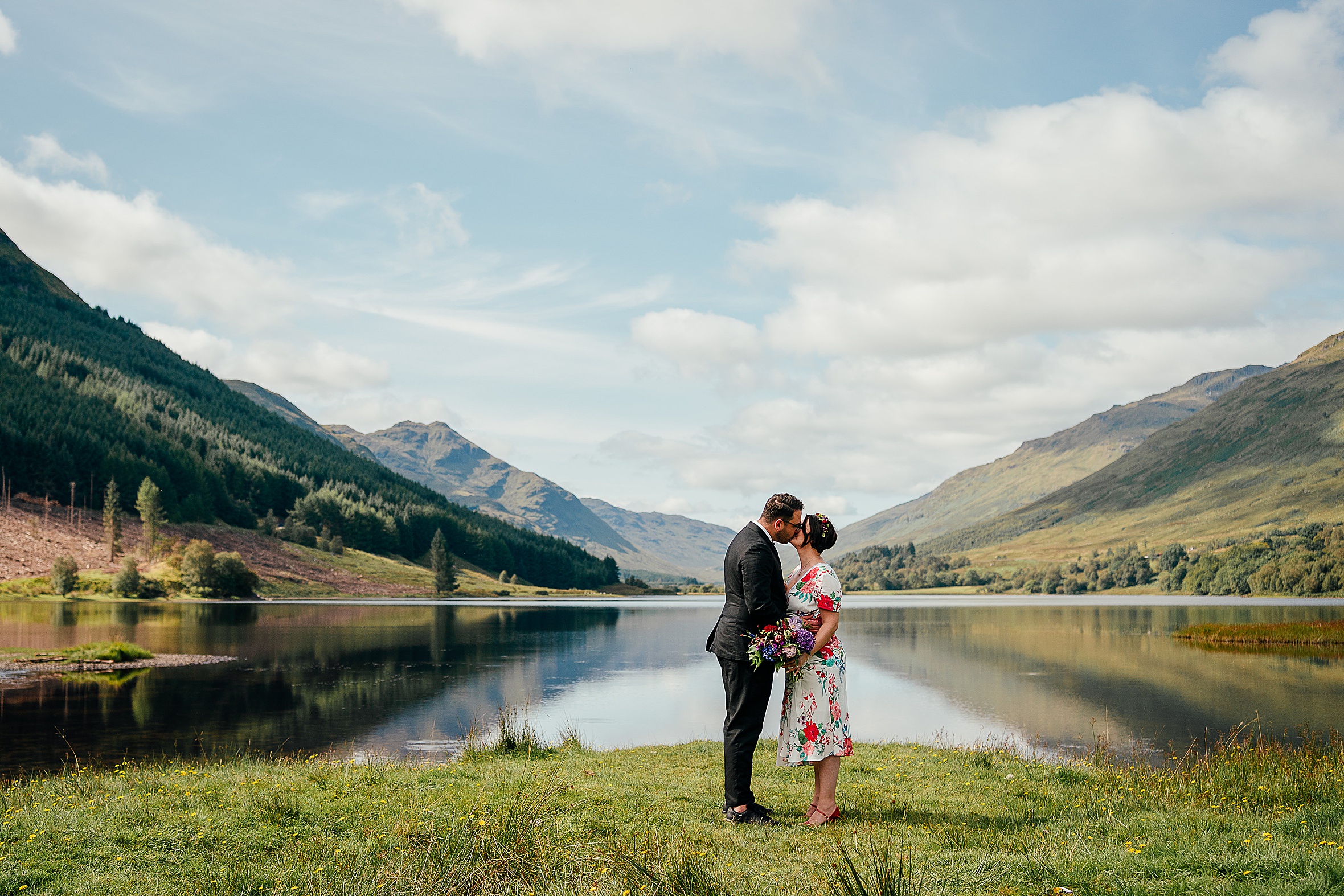 Manuela & David Elope in Scotland Lochside with Mountains for Days

"On our (wee wild) wedding day we felt so at ease, because everyone was professional, calm and friendly, just like they were during the planning phase. Although we didn’t have any guests present, we felt like we were among friends at all times. We are so happy we sent that first info request email and just went for it! We skipped all the drama, the fuss and the stress. But we savoured the beauty, the joy and the meaning of it all. For all the couples out there who don’t need a huge wedding… Have a wee one…and just make it wild! 😉💋 Manuela & David"

Three words sum up Manuela, David and their wedding day.

Those three words sum up two people who completely and utterly adore each other. Who are so super happy that they have their own dance to show how full of joy they are. That’s love right there.

I absolutely adore these two. They’re goofy, silly and right up my street! We had such a laugh throughout their day and their joy is infectious. The whole Wee Wild Weddings team spent the day with huge grins on our faces!

Want to elope in Scotland?

If you’re thinking of eloping in Scotland we don’t blame you! It’s the best place in the world to get married in and is absolutely perfect for elopements and micro weddings. Imagine saying your personalised vows on a beach, or in front of epic mountains or on the shore of a beautiful loch. Picture yourselves surrounded by your closest friends and family while you bind your hands together in a handfasting before settling down to eat an incredible picnic. You can do all of that, and more, in Scotland.

Manuela and David are both Italian but now live in Scotland. As David is half Scottish, half Italian they knew they wanted to elope and we found the perfect spot for them at Monachyle Mhor.

We love it at Monachyle Mhor. It’s a super cool boutique hotel and it even has its own treehouse! Amazing! Manuela got ready up there, “In The Trees”. It’s an awesome looking building, the design is brilliant and the views out over the glen are breathtaking.

Whilst Manuela and David were getting ready the Wee Wild Weddings gang were setting up down by the loch. Sophie Rocks (best name ever!) was our harpist. As she was thinking about where best to set up our super creative videographer James suggested that the island might be a decent spot. He wasn’t wrong! However that island isn’t the easiest place to get to. Sophie was really up for it and expertly navigated the stepping stones in her wedge heels. What a star! James was less enthusiastic about his suggestion when he realised he had to carry across a very heavy harp…but he made it and it was so worth it. The panoramic view of Sophie playing the harp on the island was fab.

After a first look up in the woods Manuela and David strolled down to the loch together. The loch was so still that day, we all agreed we’d never seen it like that before. It looked incredible and the reflections were perfect.

It was such a sentimental ceremony. Manuela’s Mum has sadly passed away and they used one of her scarves for their handfasting. That was a hugely emotional and poignant moment. Also, take a look at Manuela’s stunning engagement ring. It’s made from a piece of seaglass that her Mum had collected. It’s so unique and beautiful..

I love that they had a collection of stones with them that their friends and family had written good wishes on. During their ceremony they threw them out into the loch. This is an ancient Celtic wedding tradition known as The Pebble Toss. Well wishes and blessings are placed into a stone – or lots of stones in this case – before the stone(s) is tossed into a body of water. Water, in Celtic tradition, represents emotion.

And of course, their wedding ceremony wouldn’t be complete without The Potato Dance!

After some photos by the loch we headed up to the top of the hill for confetti..and more Potato Dances. Why not! It’s a dance of joy and no one was more full of joy that day than Manuela and David!

Have we managed to convince you that eloping in Scotland is a wonderful thing? If so then get in touch, we can make it happen for you!

Want your very own Wee Wild Wedding? Let’s do this!